WHITE HOUSE – Playing in a tough region with five very good teams, the White House Blue Devils found themselves in an unfamiliar position at the end of the 2018 season, with a winning record overall and sitting outside the playoff picture.

Sunday, the team celebrated its 6-4 year with the annual football banquet held at White House High School in the gymnasium, where team awards voted by the players were handed out and the accomplishments of the seniors and their teammates were honored for the 2018 year.

White House senior quarterback Andrew Nixon was named the Most Valuable Player for the season after completing 63 passes for 1,052 yards and 12 touchdowns, with 241 rushing yards and seven scores. Nixon finished his career with 3,671 passing yards and 509 rushing yards and 38 touchdowns through the air and 17 on the ground.

Senior Will Frazer was named the Offensive Back Award winner with 474 rushing yards to lead the team with six touchdowns. Frazer ended his career with 924 rushing yards and 83 tackles, and six receptions for 120 yards and a touchdown.

Senior Preston Sharber was the Defensive Back Award winner with 23 tackles and a team-leading five interceptions. For his career, Sharber rushed for 1,014 yards in just two seasons with 11 touchdowns, caught seven passes for 58 yards and a score, and had 85 special teams return yards with 59 tackles and nine interceptions for 193 return yards on defense.

Senior Joey Cartwright, who battled injury throughout his career until a stellar and healthy senior season, was named the recipient of the Gourley Award, one of the most prestigious honors at the banquet each year. Cartwright finished his career with 96 total tackles, and 5.5 sacks with 12 tackles for losses, and scored a special teams touchdown in his final career game recovering a blocked punt.

Senior Colby Jackson was named the Offensive Line Award winner. Jackson, also named the Academic Award winner for Region 5-4A, finished his career with 29 total tackles and his senior season helped the Blue Devils to 258.3 yards of offense per game including 144.9 per game on the ground.

Senior Ethan Rainey, a two sport star at White House with a state tournament resume in wrestling, won the Defensive Line Award. Returning to play defensive end his senior season, Rainey was second on the team with 69 tackles plus three sacks and 22 tackles for losses with 10 quarterback hurries. Rainey ended his career with 142 career tackles, including 31 for losses and 3.5 sacks.

Junior wide receiver Logan Neufeld was named the winner of the Sully Award, a presentation in honor for former Blue Devils standout twins Cody and Cory Sullins. Instead of the trophy, the award is given with a picture framed with legendary Green Bay Packers coach Vince Lombardi. The Sullins twins graduated from White House in 2005 and walked on at the University of Tennessee as offensive linemen and now are successful business owners and operators in White House and lead the annual Sullins Football Camp at WHHS. Neufeld was the leading receiver this season with 24 catches for 423 yards and five touchdowns and rushed 12 times for 68 yards and a score. He added 579 special teams return yards including a touchdown and led the team in scoring with 46 points.

Freshman awards were given to Montrell Black as the Offensive MVP, Nathan Seipp as the Defensive MVP and Ranen Blackburn as the Most Valuable Player.

The banquet ended with a video presentation for the seniors, and a gift for the team moms, then families dismissed to the cafeteria for a meal together. 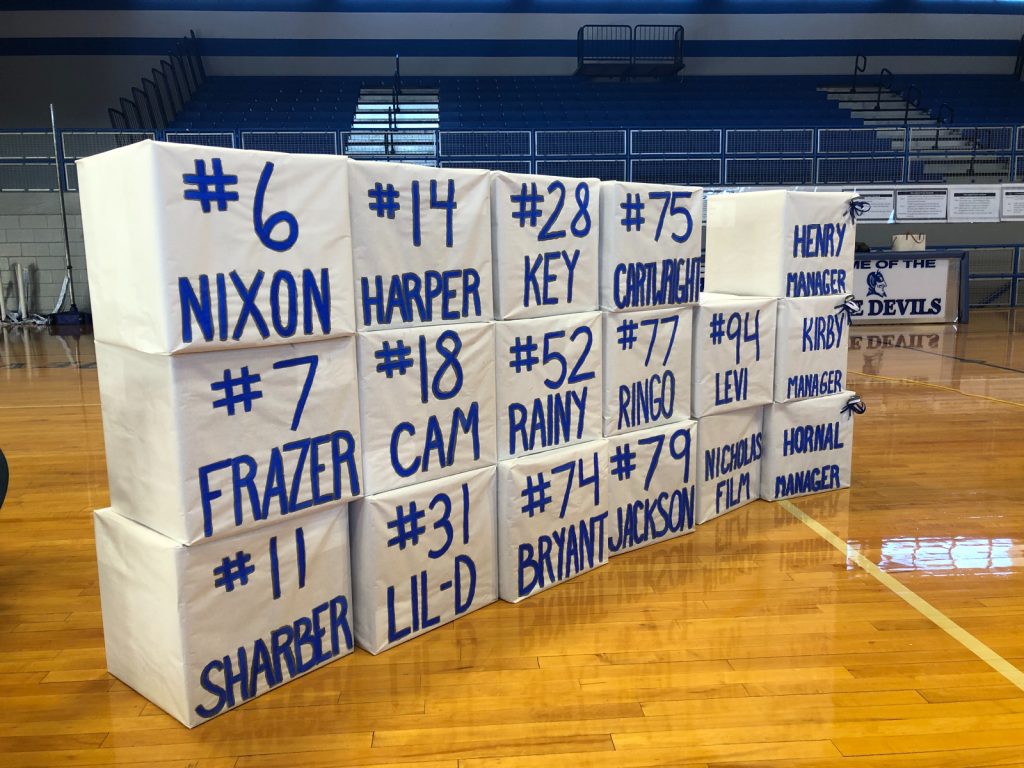