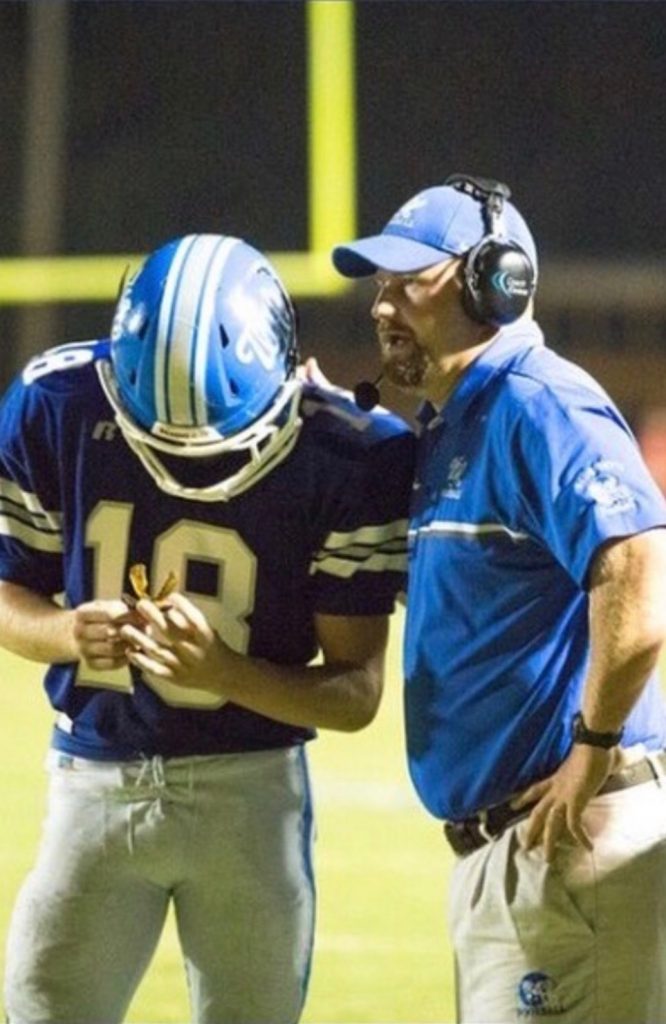 The offensive coordinator was promoted to the position after 32-year head coach Jeff Porter stepped down two weeks ago. Hamilton is an alum of White House High School and has been an assistant for 16 years overall, four as a volunteer assistant and 12 as a full-time assistant coach.

“I am very excited and thrilled to have this opportunity,” Hamilton said. “I would like to thank the administration of White House High School for giving me this chance and I am also very thankful to still have Coach Porter around. I think that is another great thing for us. This is the best place to be, and to work, and I love White House High School. I am ready to get to work.”

Porter will remain as a teacher at WHHS and work in a higher role with the full athletic department. Hamilton is the athletic director, but recused himself from the hiring process for for the football coaching position as he served as interim coach and then made the decision to apply.

“We were all shocked when Coach Porter made his decision,” Hamilton said, “but we went right back to work and kept the kids moving through the offseason program.”

White House principal Ann Miller was excited to name Coach Hamilton the new head coach, but also thankful for a large pool of applicants and the opportunities to select from the best option to lead the football program. Hamilton will be the first new head coach for football at White House since 1987, when Porter assumed the reigns from Bill Locke.

“One of the things that is very important to our school is raising students who will become future leaders in our community and give back to the place that has given much to them,” Miller said. “Ryan exemplifies everything we hope for our students and now will have the opportunity to continue that success as a head coach.

“He is a former student, a teacher, a long-time assistant and a family man that is respected on and off the field in our community, and from a football standpoint, he has a proven track record of success at White House and knows the expectations we set for our student athletes and our program in this community.”

Assistant principal Debbie Richardson has been an educator at White House since Ryan was a student for the Blue Devils. While football is a big focus, Richardson is also very appreciative of his commitment to academics.

“Ryan was a former standout student of mine,” she said. “He is academically-minded and will help our student athletes be as successful in the classroom as they are on the field. He has taken on a huge leadership role academically in the physical education department.

“I am excited for him and look forward to watching him serve in this capacity for us at White House High School.”

Assistant principal Kyle Craighead echoed the statements of his peers, having worked closely with Ryan as athletic director in his first year as an administrator at White House.

“After interviewing multiple high-quality candidates, Coach Hamilton stood out because of his preparation, attention to detail, and most importantly, his ability to build relationships with student athletes,” Craighead said. “We are excited to see him exemplify B.D.P. and continue to grow the tradition of excellence of White House Football.”

Ryan and his wife Brittany are both graduates of White House High School. He teaches strength and conditioning in addition to his athletic responsibilities. They have two children, Aubrey (6) and Jase, who will be five months old on Christmas Day. Two very important factors played a part in the decision to pursue and accept the job – his family, and his relationship with the former coach.

“When we all learned of Coach Porter’s decision, I think it took a little time for that to sink in. We all know how much that he has meant to this school and this program,” Hamilton said. “He is so much a part of the atmosphere of our school, and we pride ourselves on being one big family, and he certainly led us that way. He is the most unselfish human being I have ever known and everything this program stands for an he has big shoes to fill.

“I spent some time talking with him and talked to my family. That is very important. Brittany is like a mom to many of these football players, and my kids always going to be very involved in what we do. It’s where I have been my whole coaching career and this is my family.”

White House is coming off a 6-4 season in a tough Region 5-4A, where even with a winning record, the Blue Devils did not earn a postseason berth. As the team prepares to release soon the 2019 schedule, many of the opponents will remain the same and the road is not easier.

Still, the immediate challenge for Hamilton  is focusing the kids on preparation for the next year with the offseason workout program continuing on January 7th.

“As of now, I plan to still call the plays, but we will see what happens during the offseason and may tweak some things,” Hamilton said. “A lot of those things have to be determined, but we have a tremendous coaching staff. I am very thankful to work alongside each and every one of them. We are going to take our kids, see what they can do and are best at, and set our philosophy around them.”

A big advantage for Hamilton over the last few seasons was an in-depth look at the program as an assistant coach, working alongside Coach Porter in many aspects of football operations. Having an inside look was a tremendous advantage in preparing for the next step.

“He’s always going to be there to help and having him in the building is a big advantage for us,” Hamilton said. “Being able to play for him and coach with him and all these coaches was a huge learning experience for me. The last few years have given me the chance to see how the program works from the inside-out and prepare for the future.”

Any information or quotes in this release is available for use by media. For additional information, contact Kris Freeman, Sports Information Director, at Kristopher.freeman@sumnerschools.org or on Twitter @whitehousebdp

Ryan Hamilton completed his 12th season as a member of the coaching staff at White House, his 16th overall after serving four years as a volunteer assistant. This was his eighth year as the offensive coordinator, and he coached quarterbacks and defensive backs.

In 2018-19, Ryan will serve as the athletic director at White House High School for the first time. He was an assistant AD in 2017. As an athletic director, he will work closely with the athletic administration, staff and coaches regarding scheduling, facilities and eligibility for all Blue Devils sports.

Hamilton is known for his fiery approach to coaching and a favorite among the kids both in practice and preparation, and his intense pre-game speeches. When the hat comes off, the game is on. Hamilton’s intensity is reflected in the determination of the kids he coaches.

Hamilton graduated from Middle Tennessee State University in 2005 with a B.S. in Physical Education and Health and Human Performance. He completed his Masters in Education from Cumberland University and though he has coached basketball and served as the freshman football coach, he now works with football exclusively.

Hamilton played football at White House after transferring from Hunters Lane and was a fantastic dual threat athlete at quarterback and defensive back.

He teaches strength and conditioning at WHHS. Off the field, Hamilton is instrumental in the technical aspects of the football operations for White House. He has advanced the program in computer and video enhancements and oversees the volunteer and student staff which helps manage the team’s technical operations, including the film study and online video for players and coaches.

Ryan and Brittany were married in June 2011, and have a little girl, Aubrey (6), and recently celebrated the birth of their son, Jase Thomas (five months on Christmas Day).