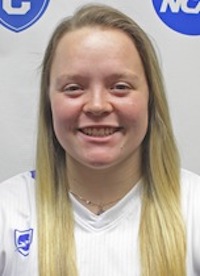 LOOKOUT MOUNTAIN — The Covenant Athletes of the Month sponsored by Atlantic Capital, the official bank of the Covenant Scots, for the month of April are softball freshman Cope Whitaker and baseball senior John Mitchell.

The Covenant Athletes of the Month is a new initiative aiming to recognize the best female and male athletes and their performances during a month. It is the first time that Whitaker and Mitchell have received honors.

Whitaker wrapped up her rookie campaign by hitting .327 with nine RBIs in 35 games played. She was second on the team with 10 multi-hit games.

Mitchell, a senior from Macon, Ga., batted .411 (23-for-56) with 17 RBIs, eight extra-base hits, 18 runs scored, and 16 stolen bases during the month. The senior was instrumental in getting Covenant into the USA South Tournament as he batted .542 (13-for-24) with a homer, 10 RBIs, and five steals over the final week of the regular season and was named the USA South Player of the Week. Mitchell had a 12-game hitting streak during the month and had six multi-hit games.

During the month, Mitchell broke the program’s single-season record for stolen bases with 27 (which also led the USA South), while tying the program mark for RBIs with 44. Mitchell, who was named to the All-USA South second team, finished the year batting .331 with three home runs, 44 RBIs, 38 runs scored, and 27 stolen bases.

CONNECT WITH THE SCOTS