This story was published in the Robertson County Connection and is a recap of last week’s game with White House Heritage. White House plays Monday at Hume Fogg at 5 p.m. Original story here. 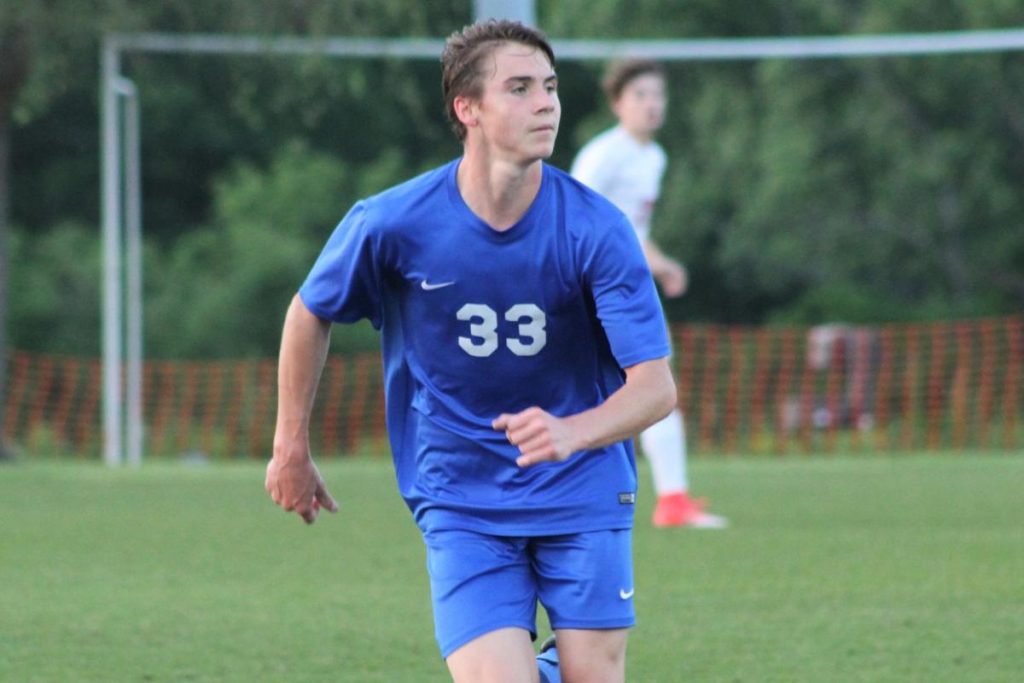 HENDERSONVILLE – The White House soccer team made quick work of rival White House Heritage in Tuesday’s District 9-AA semifinal, downing the Patriots 5-0 to clinch a spot in the title game and a region berth.

The Blue Devils (7-9-3) were set for a rematch with Beech for the District 9-AA championship Wednesday. White House beat the Bucs 1-0 in last year’s title game.

“It’ll be a battle royal to see how gets to play at home next week,” White House coach Mark Lamberth said. “The biggest thing that we’re celebrating is that this team that loves each other gets to spend another week together. That’s all I wanted.”

Freshman Bryson Harper netted a hat trick for the Blue Devils. He tallied two first half goals and added one more in the 62nd minute to complete the trifecta.

His second goal appeared to be saved by White House Heritage keeper Jalen Witham, but the ball slipped through Witham’s hands and into the net.

“We’ve got a good mix [of experience],” Lamberth said. “We have good senior leadership, a good junior keeper. Justin started playing quite a bit of varsity about midway through the season, and Bryson’s been a starter since the second scrimmage.”

Senior Jared Harper rounded out the scoring with a long strike that caught Witham out of position with 15 minutes remaining.

The Blue Devils’ stingy defense did not afford Heritage (2-11-3) many scoring chances. Goalie Isaac Layman delivered his sixth clean sheet of the season.

Heritage was without three starters and four total players due to injuries, travel schedules and a red card.

“We were super thin coming into this game,” Heritage coach Seth Kirby said. “You don’t want to make excuses, but we just didn’t have it tonight.”

Witham, who had never played soccer before this season, is Heritage’s only graduating senior, so Kirby said the outlook is bright for 2020.

“He had a really good year for having never played – he’s an amazing athlete,” Kirby said of Witham. “We started two eighth graders, three freshmen, a few sophomores and a junior. We’re super positive about the future because we’re ridiculously young.”

Two days after clinching a spot in the Region 5-AA tournament, White House faced off against Beech in the District 9-AA championship game to determine who would get to host a region contest.

The Buccaneers, who had rolled through their first two opponents, kept their momentum going in a 6-0 defeat of the Blue Devils.

White House will travel in the first round of the region tournament and was scheduled to play Hume Fogg on Monday. The loser of the game is eliminated and the winner will clinch a spot in a sub-state game later this week.