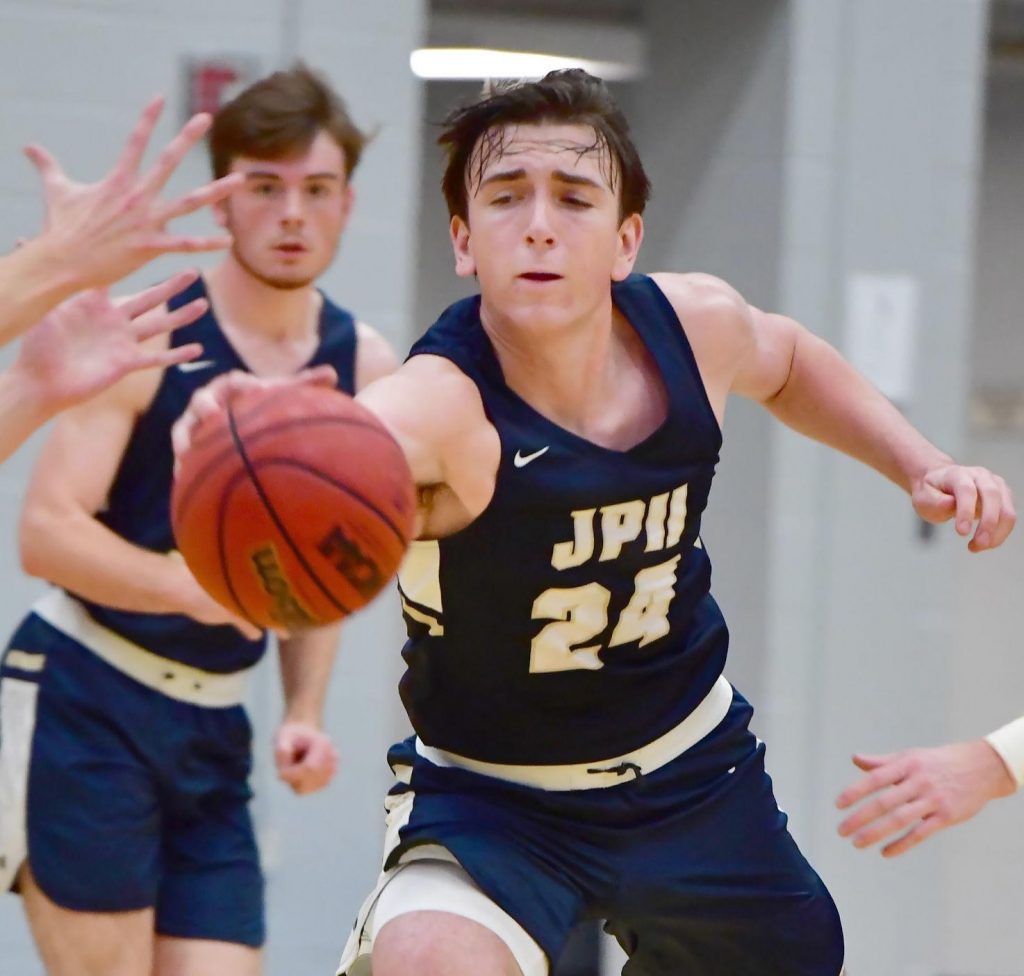 By Zach Womble for The Gallatin News | Photos by Phil Stauder

HENDERSONVILLE – The Pope John Paul II boys’ basketball team improved to 3-0 on the season Saturday afternoon taking down White House and CPA in the Beech Tip Off Classic.

Against the Blue Devils, JPII dominated as Sabino Otira poured in a game-high 23 points to lead the Knights to a 77-58 victory.

The Blue Devils jumped out to an early first-quarter lead but couldn’t hold on as JPII extended the floor with their 3-point shooting, ability to attack the rim, and get easy shots.

In the second quarter, the Knights flexed their muscles on the glass and in the paint, scoring 6 paint points and knocking down three 3-point field goals.

“I liked our defense in stretches tonight,” JPII head coach Charles Wade said. “Especially in that second quarter we were really good. That allowed us to push out the lead to as much as 20. Our defense turned into quick offense.”

“I thought Pope had some really good shooters and had some length on us,” White House head coach Caleb Cook said. “I thought overall Pope was a good team to play against. They will really benefit us down the road.”

Leading 36-18 at halftime, JPII added three more 3-point field goals and another 8 points in the paint to maintain their lead, despite hot shooting from Logan Nefeuld, who torched the net for 12 points on four 3-point field goals.

“They did a really good job of running plays for him, and we didn’t do a good job of switching over their screens and communicating,” Wade added.

In the fourth quarter, JPII did a good job of knocking down their free throws when they got to the line. The Knights went 10-for-13 from the charity stripe to preserve their double-digit lead.

They also added three more 3-pointers for a total of 12 3-pointers made in the game.

“We are a shooting team, make no mistake about it,” Wade said. “We are an outside-in team and I think that allows us to get some things on the inside as well.”

JPII scored 26 points in the second half to secure the 11 point victory.

“Kip (Brown, Beech head coach) and I have known each other for a long time and I have great respect for him and how he does things,” Wade said of why he wanted to play in the Tip-Off Classic put on by Beech. “On top of that, it is a great opportunity for us to play in Sumner County.”

JPII will be back in action on Nov. 29 at East Hickman for the Thanksgiving Tournament hosted by the Eagles.