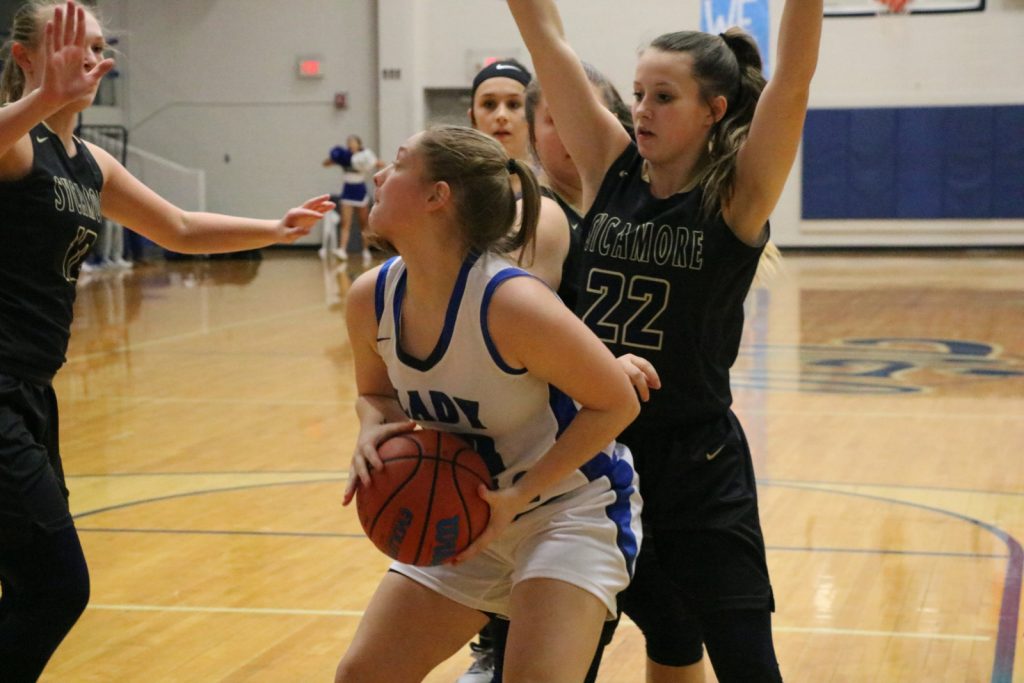 WHITE HOUSE – One year after breaking a long District 9-AA losing streak with a win over Sycamore at home, the White House Lady Devils did it again.

Senior Emma Wall hit a free throw in the final seconds to give White House a two-point lead, and the Lady Devils defensively shut down the final attempt by Sycamore to hold on for a 39-37 win. White House was riding a 19-game District 9-AA skid – 11 last season and eight this season – and improved to 6-13 (1-8). Sycamore fell to 8-11 (4-5).

Most impressive, White House avenged perhaps its toughest game of the season, a 76-41 loss at Sycamore in January. This time, they held Sycamore to less than half that total.

“We came into the game with a defensive mindset,” said White House head coach Kelly Smelcer. “We gave up 44 points per game this season in games prior to Sycamore, and since then we have given up 58 points per game. We knew we had to play a better defensive game if we wanted to pull the upset.

“The girls played really well as a team tonight and I am proud of them. We had great leadership from our three seniors on the floor.”

The game started without lineups introduced with some technical problems in the White House area with connectivity. That wasn’t unnoticed by the girls, who took it as a bit of a good omen to snap the streak.

Senior Bailey Newman, always physical around the basket, led the Lady Devils with 14 points and was the only White House player in double figures. White House opened the game with a 13-6 lead, but struggled to score in the second quarter.

Both teams went almost seven minutes without a basket in the second and then the Devils took a 15-14 lead into the break on a basket by Newman.

The scoring drought did not last into the third, however, as White House exploded for 15 points and extended the lead to 30-25, before fighting off a furious rally at the end by the Lady War Eagles.

As the lead bounced back from two points to seven, White House kept fending off the Sycamore attack. The big shot was a Wall three, and then Newman connected on another basket and made 3-of-4 at the line down the stretch.

Sycamore was playing without leading scorer Callie Guidino, out with an apparent concussion suffered in a recent game. Instead, Olivia Stuard carried the load with 21 of the team’s 37 points. Destiny Lynch scored 10, Bailey Waller two, Reagan Sutton two and McKinley Young two.