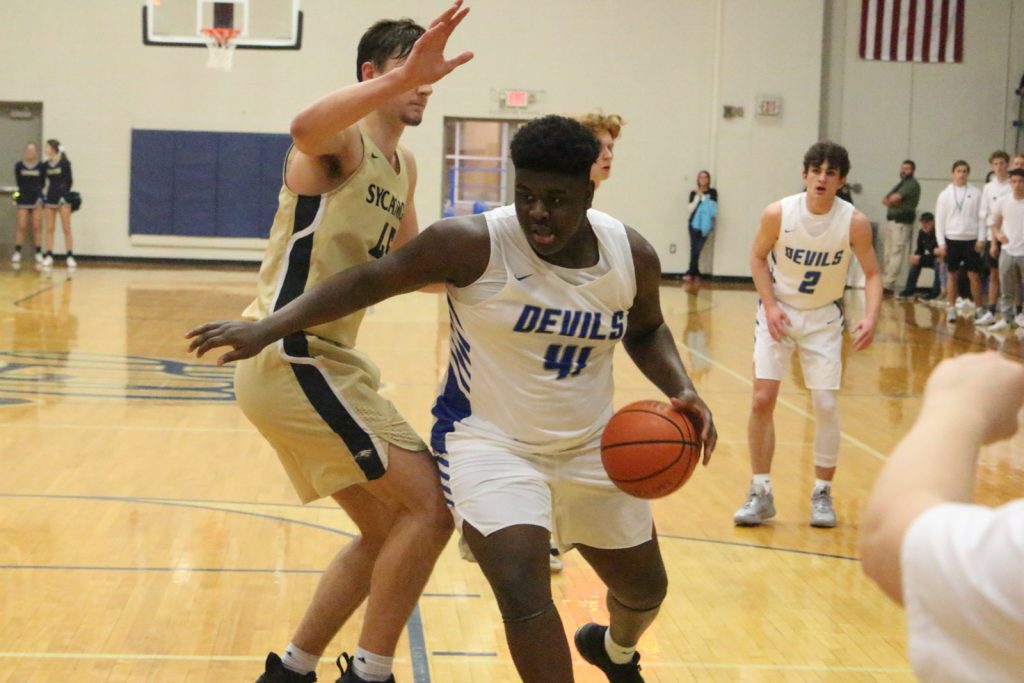 WHITE HOUSE – The White House Blue Devils are two baskets away from being undefeated in District 9-AA, with last second missed shots the difference on the road at Sycamore and White House Heritage.

Last night, the Devils made sure it wasn’t three.

The red hot hosts improved to 7-2 (9-16) in district play when senior Jacob McDonald scored on a back door bounce pass from Zak Laamal in the final seconds for a 58-56 victory over Sycamore. The War Eagles came into the game unblemished in the district and are now 16-4 overall.

With senior leading scorer Durstin Adams sidelined, the remaining seniors and teammates stepped up to play perhaps the best game of the year. White House shot 42 percent from the field and 9-of-18 from three-point range.

“It was a great team effort all around,” said White House head coach Caleb Cook. “Everyone stepped up in Durstin’s absence and shared the load. “We executed well down the stretch on both ends and that’s a testament to our kids and their togetherness on the floor.”

On a night where the scoring was balanced, it was senior Logan Neufeld lighting up the nets. He connected on five three-pointers, two in the first half and three in the second, for 15 points in the game. His hot shooting helped White House win its eighth game in 11 tries after a rocky 1-13 start to the season against tough competition in December.

“It’s just the next man up mentality,” Cook said. “We know anyone can step up and score the ball for us any night. I’m so proud of this team. We must continue to approach it one game at a time.”

The biggest difference, however, was the play of the White House bench. Starter Laamal was in for leading scorer Durstin Adams, who continues to miss with an injury. Laamal added six points all in the second half, and then juniors Quad Lucas and Nathan Bowman combined for 19 points in the first half. Lucas powered his way inside against all-world big man Daniel Saylor, not backing down from the challenge of the 6-foot-10 senior, and scored all 10 of his points in the paint in the first two quarters.

“Zak and Quad stepped up for sure,” the coach continued. “Both of those guys have played limited minutes, but have been engaged throughout, whether they play 15 minutes or two. I was proud of Durstin coaching them up every chance he had, either in a dead ball or timeout situation.”

Bowman had nine, starting off with a big three-pointer.

“Bowman has been playing so well lately,” Cook added. “He plays hard and does his job every night and he has played the one through the five for us. His nine points were huge and he made some big plays for us.”

Saylor finished with 17 points. In the third quarter, though, it was Derek Underwood and Bailey Chapman working hard on the perimeter to bring the War Eagles back into the game and actually give Sycamore a lead heading into the fourth. Underwood had 14 for the game and Chapman had 10.

That’s when White House stormed back, tying the game at 49-49 with 2:54 left on a three by Neufeld and then again at 52-52 when senior Evan Webster busted his way inside past Saylor for a three-point play, making the basket and calmly sinking the free throw. Webster finished with five and he and senior Noah Johnston played a critical role in ball movement to work the Devils back into the contest on the perimeter.

White House took a 56-52 lead on buckets by Laamal, and then Sycamore answered with four straight points in the final minute to tie the game.

White House called timeout with 16.4 seconds left, and worked a play off the top of the perimeter with McDonald and Webster feeding the ball to the high post with Laamal. After McDonald’s last hand off to the big man, he cut right and Laamal bounced a past through three defenders and McDonald undercut Saylor for the win.

The War Eagles inbounded with around six seconds left, but Seth Smith appeared fooled by the clock and launched a full-court heave with four seconds remaining, with Laamal grabbing the loose ball and flipping it into the White House side of the court for the victory. 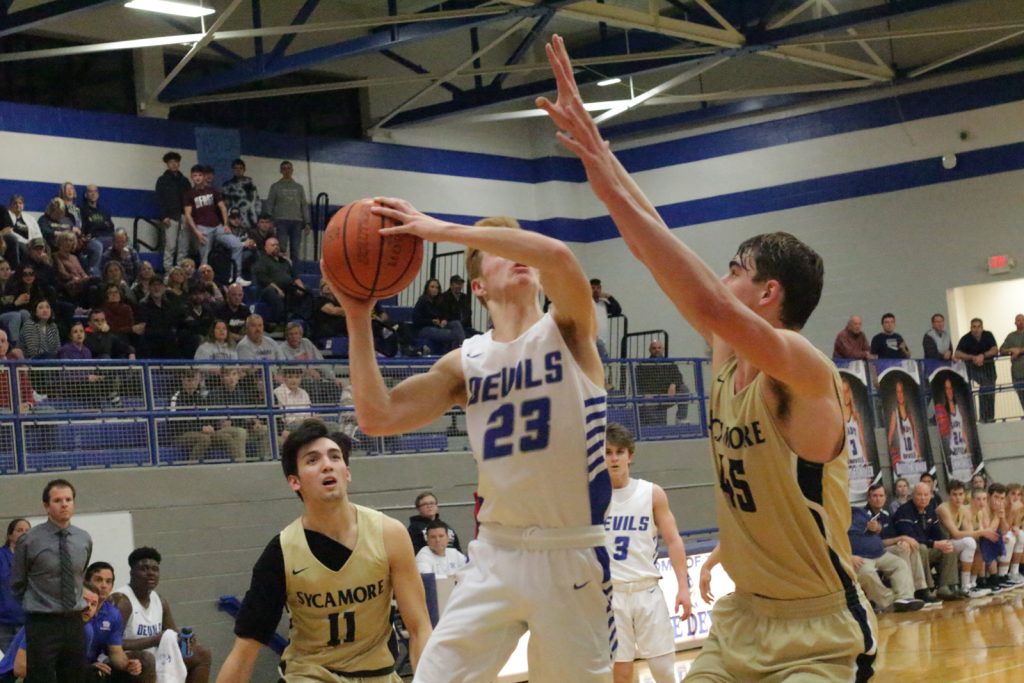