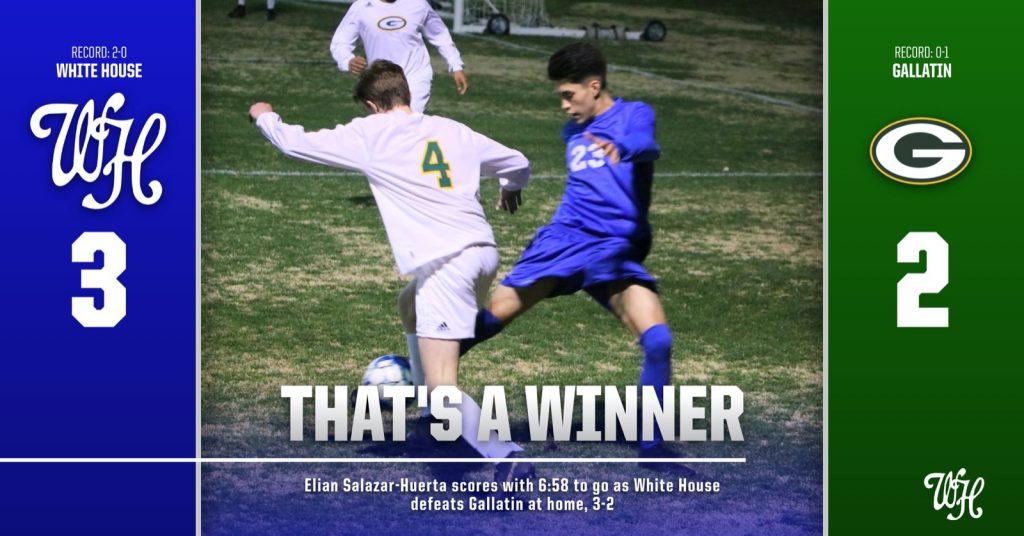 WHITE HOUSE – The White House Blue Devils were well in control at home Friday night in the second half when Gallatin scored a pair of goals in less than a minute to tie the game. But the hosts would not be outdone, as Elian Salazar-Huerta put in the clincher with 6:58 left to give White House a 3-2 win over the Green Wave.

White House played keep away in the final six minutes including kicking a free kick over the net to run out the clock in the final 19 seconds.

Lucas McKinney got the Blue Devils on the board in the first half twice, building a 2-0 lead at the half.

With 9:51 left in the first, McKinney broke in to the right side and made it 1-0, then added his second tally with 35 seconds left in the first half for the two goal lead at the intermission.

Gallatin struck quickly in the second to tie the game, first at 35:42 left, then again at 34:01. The first was a clean shot, but the second goal came after a rocket caromed off the left post and Gallatin put the rebound into a wide open right side of the net as most players froze thinking the first shot was in.

White House put on the attack for the remainder of the game and Salazar-Huerta beat his defender to the net and cashed in just inside the final seven minutes.

White House improved to 2-0 for the week after beating Rossview, 2-0 on Tuesday.

Cason Cooper had two assists in the game and Jacob Johnson one.